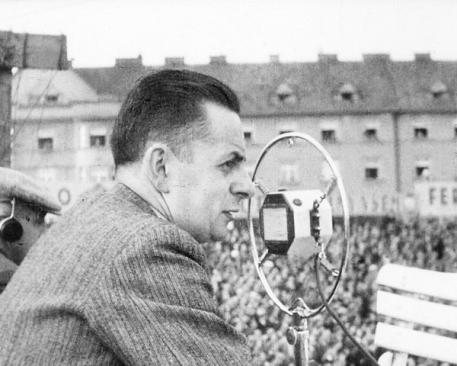 In 1931, FC Slavia's relations with Sparta, which tried to drag the forward František Svoboda, deteriorated considerably. This caused a turbulence and Svoboda finaly canceled the transfer. Shortly afterwards, the teams clashed in the Czech Cup Derby. Slavia finally defeated Sparta 2:1. The match took place on May Day and was commented on for Czech Radio by the legendary Josef Laufer. From 20ies to 1950s, the FC Slávie's home was in Letná opposite the current Sparta stadium. In 1950 the stadium had to leave because of the planned monument of Josef Stalin. Slavia club was given 600,000 Czech crowns from the state and the promise of a new stadium in Vršovice, which was to be completed by the end of 1951. For the next three years, the Slavia hosted at the Bohemians stadiums in Vršovice, Dukla and Spartak Sokolovo (Sparta) stadium in Letná.