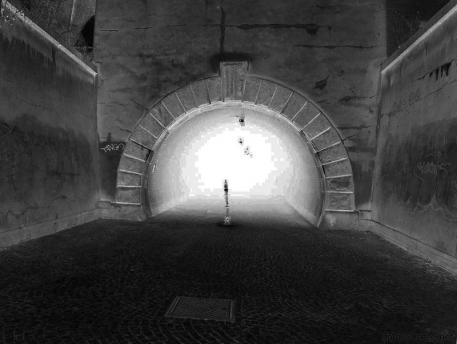 The Dream of an elderly bachelor Blumfeld

A fragment of a radio piece based on Kafka's short novel about old bachelor, Mr. Blumfeld, who was haunted by two small white balls in his dreams. “While taking the key from his pocket outside his room, he is startled by a sound coming from within. A peculiar rattling sound, very lively but very regular. Since Blumfeld has just been thinking of dogs, it reminds him of the sounds produced by paws pattering one after the other over a floor. […] he quickly unlocks the door and switches on the light. He is not prepared for what he sees. For this is magic, two small white celluloid balls with blue stripes jumping up and down side by side on the parquet; when one of them touches the floor the other is in the air, a game they continue ceaselessly to play. […] He tries to catch one but they retreat before him, thus luring him on to follow them through the room. It’s really too silly, he thinks, running after balls like this, he stands still and realizes that the moment he abandones the pursuit, they too remain on the same spot. I will try to catch them all the same, he thinks again, and hurries towards them. They immediately run away…”‘Blumfeld, an Elderly Bachelor’ (Franz Kafka, 1915). Recording from the tunel between Karlín and Žižkov, made in collaboration with Michal Kindernay.