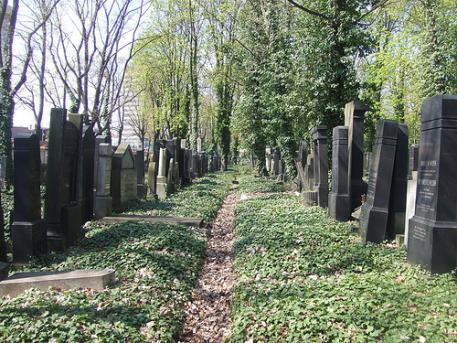 Since its establishment in 1891, the cemetery has been surrounded by the wall protecting the space for some 100.000 graves, i. e. for about one century. Supported by a considerable role the Hevra Kaddisha (burial society) the graves were established in cemetery lots both chronologically and in accordance with the family's wish and significance which played its natural and social roles even at the moment of death in the bourgeois society. The Hevra Kaddisha also saw to it that inscriptions on tombstones were truthful and testifying to the buried person's character. Since the very beginning, the cemetery has been properly divided in lots which were gradually used as graves ; and a walk around the cemetery also gives an idea of the styles in which the tombs were built. The cemetery is situated on a hill sloped from the north down to the south and from the west down to the east, in a basin in its southeastern part where a columbary with its own funeral parlor was added in the 20s.