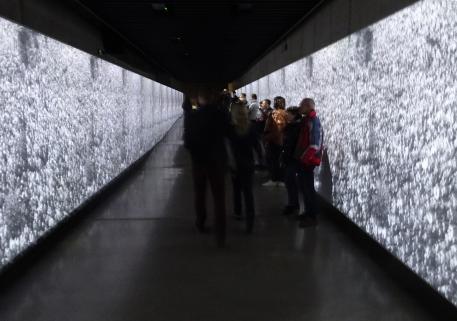 Our history in tunnel

The recently opened multimedia underground corridor connects the old and new buildings of the National Museum. It is 56 m long and on both sides covered with a continuous moving images projections, and sound in an area of about 270 m2. The images are projected by a total of 38 laser projectors through an ultra-short projection lens and mirrors. The animation and the found footage captures Prague from the birth of the universe to today in total about 10 minutes.The content consists of three multimedia chapters: Moments of the Birth of the City, Moments of the 20th Century and Moments of Life. The final part focuses on the scenes that took place on Wenceslas Square against the background of a history. It looks magnificent as a Hollywood spectacle studio product.