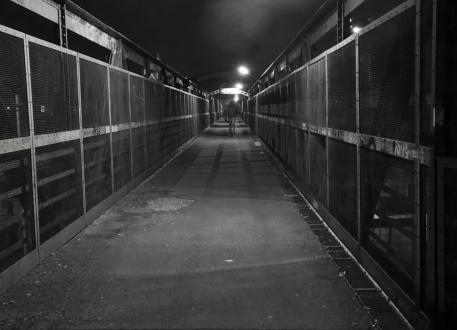 From the pedestrian bridge

The footbridge above the Smíchov railway station, connecting Nádražní Street with Radlice, provided an exquisite location to observe passing trains and the entire area. The extensive Smíchov freight railway station stretched from the malt houses of the brewery in Knížecí towards Zlíchov. At night, the landscape was illuminated by cones of yellow spotlights, with dozens of tin amplifiers protruded from tall candelabras, echoing the valley with mysterious messages and orders uttered in some unknown language. When a looming and smoking locomotive passed down below you, you could go straight home and have your white shirt washed. The footbridge was built in 1929–1930 in the Prague Mostárna ČKD (Českomoravská Kolben Daněk). In 1953, the tower on the Smíchov side was shifted towards Nádražní Street. In 1999, after a survey, the condition of the footbridge was assessed as bad or very bad (corrosion weakening of the structure) and in 2002 the footbridge was closed for a while and repaired. On the Radlice side, the footbridge was shortened by 45 m during the modifications of the road and the staircase was replaced by a connection to the sidewalk. The reconstruction was to extend the life of the building by 30 years. In 2007, a staircase was added from the footbridge to the Prague-Smíchov northern platform railway station, which has since been canceled. In 2022, the footbridge will be torn down and replaced by a new bridge, in framework of the general housing development below it.