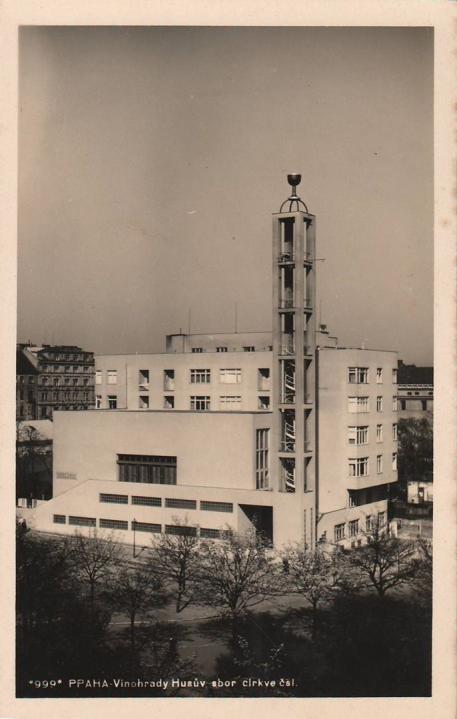 Hussits and kids on Vinohrady

The Hus Congregational House was built between 1930 and 1935 to architect Pavel Janák's constructivist design in Dykova Street in Prague vinohrady for a Hussite congregation. The land near the old water works had been purchased in 1925, and the Church commissioned Pavel Janek to create a novel design for the church.
Janek's first design in 1929 was accepted by the Church elders but rejected by the town planners. The following year's design included an apartment building, a theatre and a six-storey tower. By this time the symbolic foundation stone had been laid but work on the first real building did not start until 1 July 1932. Janák had previous experience of pre-stressed concrete as he had worked on the church in Vršovice, which was built in 1930. Fourteen months after this building was started the reinforced-concrete framed church held its first service and the building was delivered under budget. The six-storey tower is just under 35 metres high and the top three floors incorporate bells. The design includes spiral staircases for the first three floors, while upper floors have ladders for access.The symbol of the Hussite Church, a copper chalice that weighs 700 kg and stands over two metres tall, was consecrated and installed on top of the tower in June 1933 in the "Celebration of the Goblet". In 1938 the design was reworked by Jiři Jakub. He converted the space under the church that had been designed as a theatre into a columbarium where funeral urns could be stored. The tower was used between 7 and 9 May 1945 as an impromptu radio tower during the Prague uprising, when it sheltered Czech resistance fighters who were trying to evict the occupying German forces from the city.[ wikipedia]