< Flame in the Gasworks Michle Hussits and kids on Vinohrady > 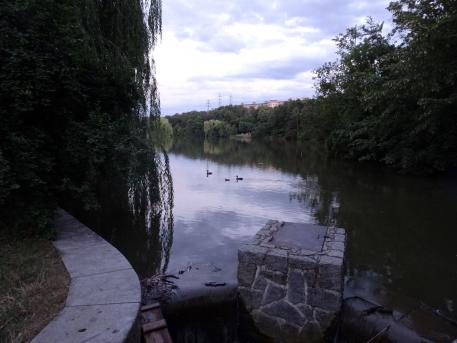 At the Hamerský pond Záběhlice

Falling water is heard at the sluice, and swifts occasionally fly in the sky. The pond is between Záběhlice and Spořilov on the Botič and Hamerský brook. On the right bank is the Church of the Birth of the Virgin Mary. The pond was founded in 1770 in connection with the establishment of copper iron mills and the water was used to power a copper mill. It is likely that the pond is older and has only been renewed or expanded. In the 1960s, the remains of a medieval fortress were found at the bottom of the pond. During the revitalization in 2008-2009, the eastern islet and small wetlands were built in the eastern part of the pond. There is a sports complex on the north bank.