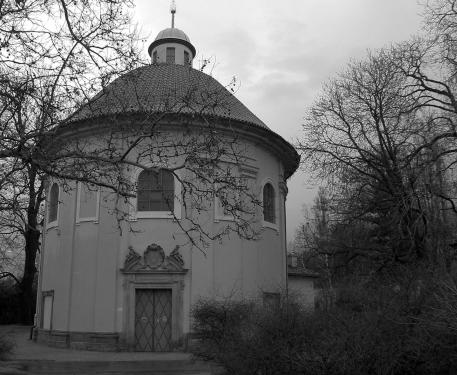 Inside the church of Saint Roch

Church of st. Rocha, Sebestian and Rozalie near Olšany Cemeteries near Olšany Square was built between 1680 and 1682 as a plague chapel. It served together with the cemetery fot victims of the plague epidemic that raged in Prague. In order to bury the dead three plague cemeteries were established: Olšany, Old Town, New Town and Jewish. A plague chapel was built in 1682 at the newly founded burial ground at the decision of the Old Town Hall, probably according to the plans of Jean Baptist Mathey. The building is in the oldest part of the Olšany Cemeteries, which at the time of the church's establishment were beyond the city walls of Prague, in the place of Wolšany settlement. Most of the church's furnishings date back to the end of the nineteenth century. The reconstruction from 2005-2006 left new architectural elements in the church (altar, confessional and forged door with stained glass).