< Jan Masaryk about Prague from London Carnival in Hlubočepy > 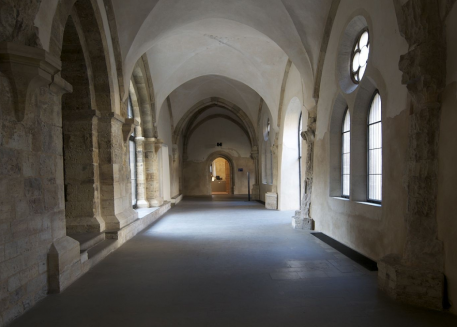 Monastery of saint Agnes and Stínadla

In the ambit of the Saint Agnes Monastery Na Františku Old Town.Walking in the premises of the Chapel of Our Lady, of the burial ground of the Premsela family, to the Church of Our Saviour, presbytery of the Church of Saint Franciscus and the Anežka oratory. After destroying the district in the early 20th century between the church of saint Haštal and St. Agnes Convent are left only remnants of the small streets Řásnovka, Kozí and U Milosrdných equipped with old gas lamps. Between 50 and 80ies the rest of medieval houses surrounding around the former convent were demolished and one of the mysterious parts of Prague, where Jaroslav Foglar apparently drew his inspiration for the psychogeography of Stínadla - the dark labyrinth of streets and dark passages between Klášterská and Řásnovka, courts around the monastery disappeared. There were outbuildings and underground passages through which supposedly one could penetrate towards the Vltava embankment.