< Celebration for the drowned The Traditional Mountfield Cutters tour for free > 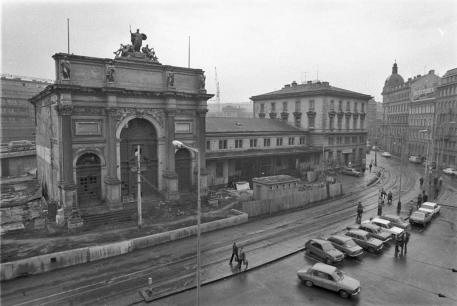 part of a two-hour sound intervention for the former Denisovo nádraží in Prague. The Denisovo Railway Station in Těšnov was one of the three central railway hubs of Prague. It was in operation from 1875 to 1972. Historians consider the building to be one of the most valuable station buildings in Central Europe. On March 16, 1985, the already damaged and dilapidated building was blown up with dynamite due to its state of disrepair and because of the near highway.

In the park, there was an evening musical performance lasting about 110 minutes, in which field recordings by Peter Cusack, Martin Janíček, Lloyd Dunn, Slavek Kwi, Peter Simon, Martin Lauer, Petra Kapš, etc. were played from speakers and mixed by zvukac and live by Janiček.

The program was prepared by a collective of authors associated with the sonicity portal.

In Cooperation with the Newt Association, the event was part of the accompanying program of the Festival m3 / Art in Space / Between Interspaces.