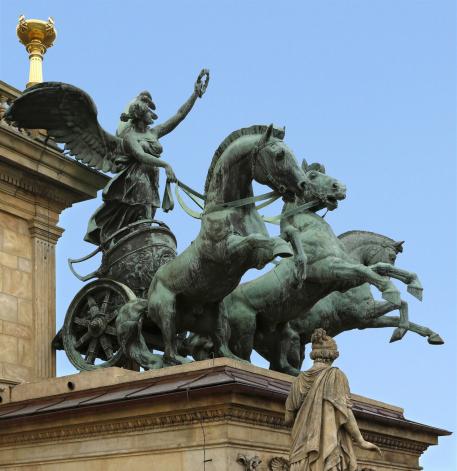 Two triga under the leadership of winged goddesses Victoria is forever rushing from the roof of the National Theatre towards the Vltava already for 105 years. Bohuslav Schnirch died in 1901 and triga casted in bronze after the model of his wife Julia have been placed on the National Theatre ten years after his death. Actually: horses and carts are Schnirch a pair of Victoria statues were sculpted by Ladislav Šaloun. Trigas were restored are obviously hollow and clearly visible from the opposite Lažanský Palace. Because the intersection of Smetana embankment and the Národní street are acoustically very strongly influenced by traffic poor Victoria must tingle her metal ears. Recording made from one of the windows heading for the National Theatre on first Wednesday of the month at noon, when all over Prague regularly protracted wail of Sirens can be heard. Isabelle Stengers talks on internet.