< Main Railway Station in a Time of War Pecka! > 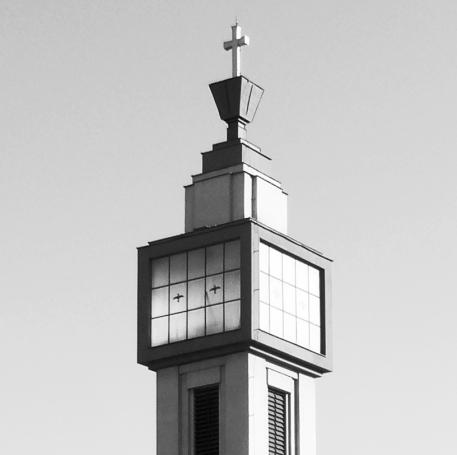 The Hus' House was built in 1930 using the novel material of pre-stressed concrete. An unusual foundation stone was laid on 29 September 1929, as the stone had an association with Jan Hus The main contractor was the builder Václav Nekvasil who was told in March 1930 that they needed to complete the build that year. This was achieved on 21 December when the opening was celebrated. The design included a theatre that seated almost 300 people with space for an orchestra, dressing rooms and make-up and offices. Other activities in the building include a film club, lectures and other cultural activities. The theatre brings in an income and the multi-function building also included accommodation for pensioners and part of the space is let to the branch of a bank. This income pays for maintaining the building and its columbarium as well as contributing to the wider aims of the church. The design of the tower was a collaboration with Pavel Janák who designed the other nearby Hussite church in Vinohrady. It is topped at 33 metres (108 ft) by a chalice which is a key symbol of the Hussite church as well as a cross.There is an extended floor near the top of the tower which is surrounded by the four large glass panels. The design for the tower has four tall thin shuttered windows. The tower was intended to be seen as a "ship's lantern" which symbolises a "lighthouse" pointing the way to eternity.