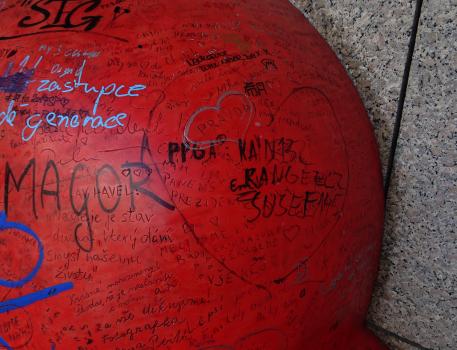 On October 2016, Adriana Krnáčová, the former Mayor of Prague, said: “I believe that this space perfectly represents what Havel sought. a place for meeting, discussion, free thinking and humanity”. On that occasion, Kurt Gebauer attached to the stone wall of the theater a large sculpture of a red inflatable heart dedicated to Václav Havel. Around it, there are several more, made from iron bars, embedded in the pavement. These symbolize a prison where Havel spent a total five years. Admirers can write and send their messages to the former president.

The space of the piazzetta of the National Theater was designed by brutalist architect Karel Prager as part of the New Stage project. The building, which was nicknamed in the 80s the "half-liter" or "heating accumulator" because of its glass facade , stands on the site of the former Choura (also Kaura) houses built between 1844-48. They blocked the southern facades of Národní Street between the theater and the Saint Voršilsa monastery. In the 1950s, their condition was reported to be bad, and in 1959 the municipality decided to demolish them.

The bell of the turret of the nearby monastery of Saint Voršilawas today sounded unusually clear, accompanied by the steady rumbling of a lone skateboarder, and the occasional hum of the almost empty trams.