< Bells on Václav Havel Square Draft from the Skylight > 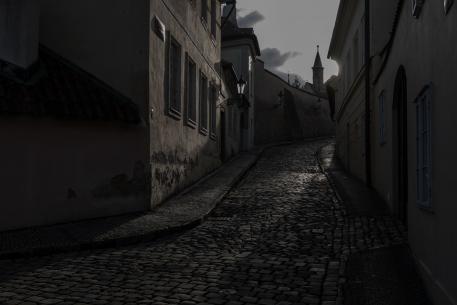 I recently went out of my apartment into the streets of an unknown city; one largely without people. Each year, Prague welcomes millions of visitors. They swarm the attractions, they choke the streets. They guzzle the beer and drop wads of cash on tasteless trifles. Some swoon at the complete Baroqueness of the city; some leave grafitti on the precious monuments. Sometimes, they carelessly laugh at things taken seriously by Praguers, and sometimes they stand in awe at things the locals find banal. Today, it is as if a tornado has come and swept them all away.

Not just the visitors, but the locals, too. By government decree, beginning at midnight 16 March, 2020, anyone without a valid reason to be out in public must stay at home. It is for our own safety, and the safety of others.

The evening before that, I went out one last time before the curtain is drawn. The planet Venus, bright enough to cast a shadow, hangs in the northern sky. Light from a corner večerka (shop with late hours) spills out onto the street as the shopkeeper prepares to close. I stop, not far from Loreta. Standing in the empty streets of Nový Svět (New World), I hear the faraway bell of St. Vitus Cathedral in Hradčany strike eleven o’clock.

What new world awaits us when all of this is over?