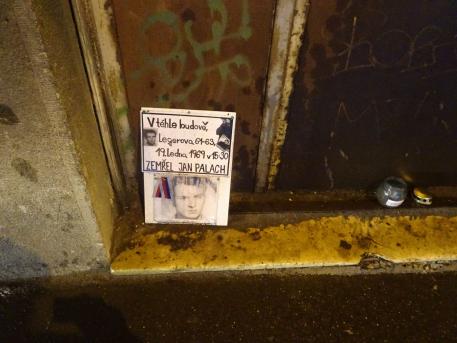 A Candle for Toufar and Highway

The huge building in Legerova street in Vinohohrady no. 1627/61 and 1607/63 looks both inside and out like the backdrop of a war movie. The house stands on the Prague highway and that the sanatorium used to serve the Prague creme-dela-creme sounds absurd today. The sanatorium was originally owned by MUDr. Hausman and after his death in 1923 was bought by the surgeon and gynecologist MUDr. Vladimír Borůvka. In 1931 Borůvka bought a side house. During the war, the hospital was confiscated by the Nazis and turned into a clinic for German children staying in the Protectorate as part of the KLV - Kindelandverschickung project. After the war Professor František Burian, who founded the first Institute of Plastic Surgery in 1925, opened the Burn Treatment Department of the Clinic of Plastic Surgery on the 4th floor. The hospital became famous thanks to Jan Palach's death in 1969. 25.2. in 1950, after the interrogation of the StB, the beaten priest from Nečtiny Josef Toufar died also here.

The program for the 70th anniversary of his death was called "Candle for Toufar" and the court was opened to visitors. After the screening of the film documentary and the speech of the mayor and others, the song Elegy of Toufar's Cross was heard and broadcast by CESNET. For this occasion, the sanatorium was wirelessly connected to four sites using the Modular Video Transmission Platform and Ultragid software. This network allowed musicians to play in a synchronous way at distant locations: bells, organ and singing sounded from the Church of Sts. Ludmila, from the Church of St. Stephen's Church. Ignác and the church of st. Kateřiny. The sound of the bells accompanied the composition by Antonín Šrajer and Zdenek Polášek, sung by Michaela Gemrotová, the organist Jaroslav Tůma and drummers from Groove Army. The author and dramaturg of the performance was Otakar Dušek. The building is owned by a private owner of the Ostrava company UNITED CORPORATION a.s. who wants to open a hotel here. Eventually the visitors lit the candles for Toufar.