< Draft from the Skylight A Candle for Toufar and Highway > 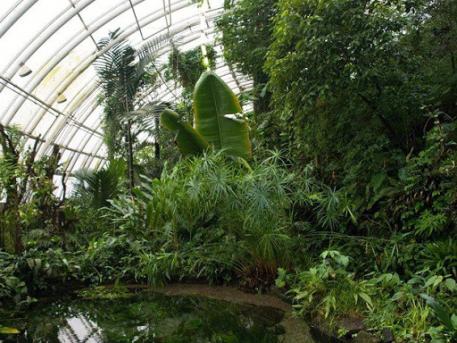 The largest indoor sound installation of Prague is in the Troja greenhouse called Fata Morgana. The indoor space of 1750 square meters is amplyfied with PA and the speakers echoing the voices of birds, perhaps amphibians, I did not find out whether voices are localized to individual habitats and nowhere was information about the animals. (the web says: birds, monkeys, hyenas, frogs, cicadas and more). In the largest section of the greenhouse, the tropical forest simulation is represented by plants of South America and Central American sites, flora of Australia and Oceania, Africa and Madagascar, Vietnam, the Sund Islands and the Philippines. There is a tropical lake and a waterfall. In the cold part is the environment of high mountains with plants of Andes, mountainous regions of mainland and island of Asia and subtropical South Africa. The central part is devoted to the vegetation of the table mountains of Venezuela, the formation of the so-called tepu.

The large greenhouse in the Botanical Garden in Troja was built from 1996 to 2003, reopened in 2012 after reconstruction. According to the Wikipedia, the implementation was accompanied by "suspicious circumstances and ilegal practices"; The annual operating costs in 2003 were ten million crowns.